You are here: Blog:: Eidam & PartnerAllgemeinNegotiate like in 1,001 Nights

The industrialized countries in the Arab world – countries like Saudi Arabia and the United Arab Emirates – have registered significant economic growth in recent years. Countries from Europe are constantly finding new sales markets there. Negotiations with potential customers and future business partners from these countries are thus extremely important. In order for you to be as competently prepared for these cross-cultural situations as possible, we’d like to provide you with some information about conducting negotiations in the Arab world in today’s blog post.

Arab negotiation culture is, historically speaking, strongly influenced by trade and mobility. Animated commerce existed in souks, where salesmen offered their wares from all over the world, as early as the first few centuries of the common era. Traveling merchants also joined together in caravans, and these caravans provided solidarity and mutual protection. The merchants had maxims that could not be broken, as this was the only way to ensure safe travels. A negotiation culture emerged that was focused on an interpersonal level. Salesmen would first have to convince others of their character before they could sell their advertised wares.

Haggling and bargaining are still a big part of the Arab business culture. Negotiations with Arabs can seem tedious to Westerners, as they can take up a lot of time and don’t always proceed linearly. Offers can even be pushed to the sidelines and left there for several months before being pursued again. Long breaks in negotiations should consequently not 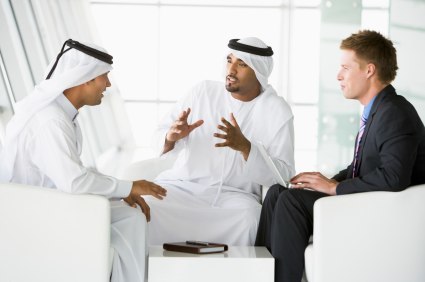 be misunderstood as a discontinuation of business.

Arabs also tend to show a lot of gestures and emotions when they negotiate. For Westerners, it can look like the pinnacle of theatrical performance when they fall from a cordial, friendly mood into a discontent, irritated mood. Don’t let it get upset you. These histrionics serve only to clarify standpoints and to work toward a bilaterally satisfactory win-win situation.

Keep in mind that collaborations with Arab companies can often take up a lot of time. You should bring to them as much patience, flexibility and perseverance as possible. Closing contracts can sometimes take up to as long as two years or more. Here we’d like to give you some specific tips regarding your behavior.

More information on other interesting topics and target countries can be found on Eidam & Partner’s website.